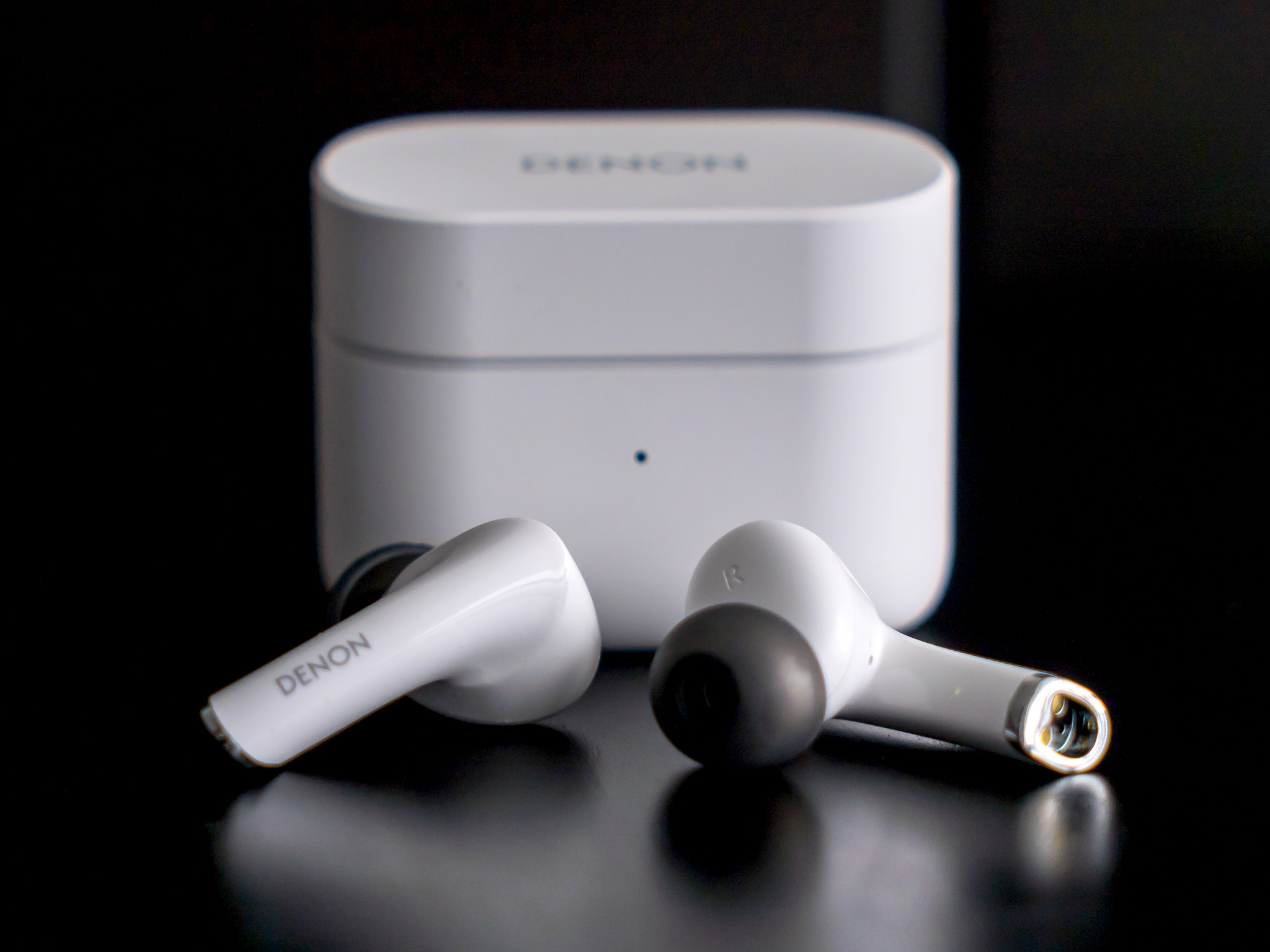 It’s almost as if Denon decided to wait until the market for true wireless earbuds was reaching critical mass before entering the fray. It’s a bold strategy… but it’s just about paid off.

The AH-C830NCW have enough sonic talent to stand out from the (enormous) crowd, though, even if they look like just another pair of stem-sporting AirPods rivals. Not only is the standard of build and finish well up to the standard everyone expects from Denon, but the sound – balanced, poised, energetic, and detailed – is extremely well-judged. There aren’t many competitors that can measure up to Denon’s first wireless earbuds in terms of audio performance.

‘Great sound’ is the beginning and the end of what makes the AH-C830NCW competitive, though. There’s no control app here, and consequently no facility to mess with EQ levels, change the intensity of noise cancellation, update firmware or anything like that. There’s no voice control. And it’s safe to say the touch-controls are limited in their functionality. Listeners who like complete control of their earbuds will be thwarted here.

Because these are true wireless earbuds we’re discussing, it almost goes without saying that you’re spoiled for choice at this sort of money. A quick glance at our list of the best true wireless earbuds of 2022 reveals models from Sony, Cambridge Audio, Sennheiser, Lypertek, Beats and Apple all just waiting to part you from a very similar sum.

How do you like your true wireless earbuds? With a dangly stem? In a choice of shiny white or shiny black finishes? With an extremely brief list of control options? Read on – the Denon AH-C830NCW may be the buds you’re looking for.

As with pretty much every product ever to carry the ‘Denon’ brand name, you can take build quality and the standard of finish for granted. These are properly-made earbuds, built to last – as long as the slippery shiny finish doesn’t cause you to drop them when fishing them out of their charging case, anyhow. At 5.3g each they’re fairly light, and the combination of careful ergonomic design and a selection of differently-sized silicone eartips means they fit well and stay comfortable.

Denon has even managed to bring a tiny touch of individuality to the ‘stem’ design, too – it finishes at an angle and is capped in contrasting silver.

There’s some touch-control functionality built into each earbud – but not all that much, mind you. ‘Play/pause’, ‘skip forwards/backwards’, noise-cancelling on/off/ambient’ and ‘answer/end call’ are your lot – there’s no facility to adjust volume nor to summon a voice assistant, because the Denon earbuds don’t feature voice control. And while we’re discussing things the AH-C830NCW don’t have, we can add a control app (and, subsequently, EQ or active noise-cancellation adjustment) to the list too.

The active noise cancellation is facilitated by a couple of mics in each earbud, while call quality is handled by another three. Wireless connectivity is via Bluetooth 5 and codec support extends to SBC and AAC – that means there’s no hi-res audio support. Audio is delivered to your ears by a couple of oval (11mm x 10mm) full-range dynamic drivers.

Battery life is a respectable-but-hardly-class-leading five hours from the earbuds (with noise-cancelling on) or six (with it switched off) – there are another four full charges held in the case. The case itself has to be charged via USB-C, as there’s no support for wireless charging.

Given that there’s no facility here to tweak EQ settings, the pressure’s on Denon to get the sound right – happily, we think the company has done very well to create a natural, tonally even, full-range and coherent listen.

There’s a very pleasant effortlessness, a sort of inherent correctness, to the way these earbuds present music of all kinds. From Animal Collective’s My Girls to Warren Zevon’s Piano Fighter via The Rite of Spring by Stravinsky/New York Philharmonic/Zubin Mehta, the Denon earbuds are never less than believable and properly listenable.

They shape low-frequency sounds well, never letting them drag at tempos or squash rhythmic expression – and they deliver convincing texture with high detail levels while they’re at it. They give a singer proper expression too, projecting the midrange and allowing it space to breathe. At the top end they play it fractionally safe in that they never come close to sounding harsh, but there’s still enough sparkle to let treble sounds attack. And throughout, the amount of detail that’s available makes the most of every recording.

The AH-C830NCW express dynamic variations well too (the big shifts and the more minor harmonic variations as well), and do really good work with soundstages too. Laying out a symphony orchestra in a rational manner isn’t all that easy for even the most expensive earbuds, but there’s no mistaking where everyone’s sitting when the Denon buds describe it.

The active noise cancellation is a slightly more qualified success. The AH-C830NCW do a workmanlike job, but you don’t have to spend that much more for a pair of buds that can block out environmental sound more robustly. If you’re hoping for a Bose-like noise-floor you’ll be mildly disappointed.